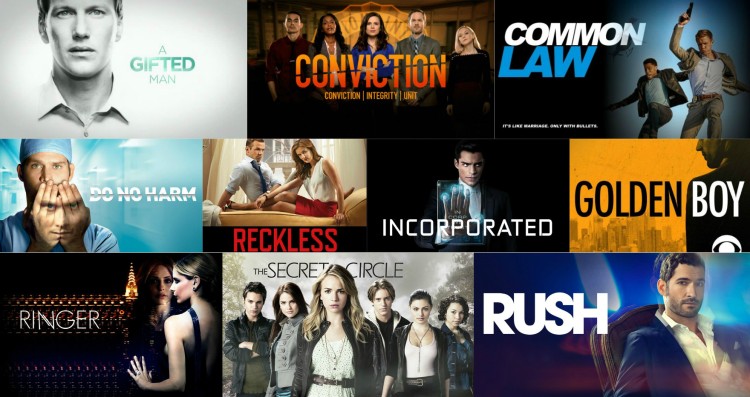 I have been binge watching a lot of tv series lately, which made me think of the below, wishing they had renewed them for more seasons….

A Gifted Man (2012) – Centers on an ultra-competitive surgeon whose life is changed forever when his ex-wife dies and begins teaching him what life is all about from the here-after. When Anna asks Michael to go to her clinic to help keep it running, he meets Autumn, a volunteer carrying on Anna’s work with the underprivileged. Touched by those in need and accepting of Anna’s compassionate “presence”, Michael’s attitude toward serving the rich and poor is turned upside down, and he begins to see that there’s room in his life for everyone.

Conviction (2016) – Lawyer and former First Daughter Hayes Morrison is about to accept a job offered from her nemesis, NY District Attorney Wayne Wallis, to avoid jail time for cocaine possession and avoid hurting her mother’s Senate campaign.  Working with his team at the new Conviction Integrity Unit will let her use her brilliant mind to turn over cases, where there is credible suspicion of wrongful conviction, and give her a chance to turn things around with her high-powered political family.

Common Law (2012) – Travis Marks and Wes Mitchell are two cops with a problem… each other. Wes, a methodical former lawyer with a passion for cars, gardening and his ex-wife, and Travis, a maverick ladies’ man who served time in juvenile hall, can’t stand each other.  As partners, they were LAPD’s dream team on the homicide squad but constant bickering got in the way of their work and the two ended up on probation. To revive their flagging professional relationship, their Captain sends them to couples therapy to help understand and resolve their conflicts. We soon learn that a successful relationship or partnership doesn’t mean you have to like the same things; you just have to hate the same things.

Do No Harm (2013) – The series focuses on Dr. Jason Cole, a successful neurosurgeon with a secret. Every night at 8:25 p.m., and lasting exactly 12 hours, Cole is switched into an alternate, evil personality named Ian Price. Cole has been able to suppress Price by injecting a strong pharmaceutical mixture that sedates their shared body, rendering it impossible for the evil alter-ego to function. But one night Cole discovers that their body has grown immune to the drug and Price has emerged in a rage. Angry at having been suppressed, Cole’s alternate personality is focused on wreaking havoc on Cole’s life, creating problems that could cost him his romance, career, and even his life

Golden Boy (2013) – Walter Clark is destined to be the youngest police commissioner in the history of the NYPD. This is the story of how it came to be. It begins 7 years before he became commissioner, when he was a rookie cop who saved the life of his partner who was shot and a hostage. This was witnessed by several people, and he would get promoted to detective and offered the position of his choice. Clark asks to be assigned to a homicide task force. When he arrives, one of the detectives who was the star of the unit until Clark arrived resents his presence. And the detective assigned to him feels as if he’s babysitting him. But Clark sets out to do the best job he can

Incorporated (2016) – The series takes place in a dystopian Milwaukee in the year 2074, where many countries have gone bankrupt due to a number of crises and climate change. In the absence of effective government, powerful multinational corporations have become de facto governments, controlling areas called Green Zones. The remaining territories are called Red Zones, where governance is weak or non-existent. Ben Larson is a young executive who conceals his true identity to infiltrate a dangerous corporate world to save the woman he loves. But he’ll soon learn that he’s not the only one whose secrets may have deadly consequences

Reckless (2014) – In sultry Charleston, where summer is long and secrets simmer behind every door, sex and crime walk hand in hand as two adversaries, a gorgeous Yankee litigator and a southern City Attorney, struggle to hide their intense attraction while clashing over a police sex scandal that threatens to implode the city.

Ringer (2011) – Bridget is the sole witness to a professional hit. Despite the assurances of her FBI protector she knows her life is on the line. She flees to New York. In New York, Bridget reunites with her estranged twin, Siobhan. Wealthy, pampered and married to the strikingly handsome Andrew Martin, Siobhan lives what appears to be a fairy tale life – a life where no one knows that Bridget exists. The sisters seem to be mending their frayed relationship, until Siobhan disappears mysteriously, and Bridget makes the split decision to take on her sister’s identity. She discovers shocking secrets, not only about her sister and her marriage, but also about Siobhan’s best friend, Gemma, and Gemma’s husband, Henry.  And when someone tries to kill Bridget in her sister’s penthouse, she realizes she is no safer as Siobhan than she is as herself.

Rush (2014) – The fast paced Hollywood drama, “Rush” is about Dr. William Rush who is not your average on-call doctor – he’s not attached to any hospital, he’s highly discreet no matter what the ailment as long as the client can pay his cash-only premium and the doctor can party with the best of them. He has no desire to change his life or how he lives it, until an old flame and his conscience begin to stir things up.

The Secret Circle (2011) – Following the death of her mother, Cassie Blake moves to Chance Harbor, Washington, to live with her grandmother. Her attempts to adjust to the new town are crushed when five of her classmates, Adam Conant, Diana Meade, Faye Chamberlain, Melissa Glaser,and Nick Armstrong, reveal to Cassie that she comes from a long line of witches and is the final member of their coven; with her they are able to unlock the full extent of their powers. Initially Cassie refuses to believe that she is a witch, even after Adam helps her to unlock her powers. It is only after she discovers an old leather-bound book of spells left to her by her late mother, Amelia, that Cassie begins to accept her power. Inside the book is a message to Cassie explaining that she kept their real family history and her powers a secret in order to keep her safe; as the circle soon finds out, their powers attract dark and dangerous forces that constantly puts them in harm’s way.

*** Have you watched any of these shows, do you wish any of these would have been renewed for a 2nd season, or shows not on my list that you enjoyed and wanted more seasons of ???

Have a great night