Today i’m sharing some of the books which are on my Bookshelf, some i’ve already read and i still have to read. I can’t share all my books as this post would go on for days but i’m going to share 5 book series. Some have already been turned into movies and others are in the works to be turned into a TV Series or Movies. 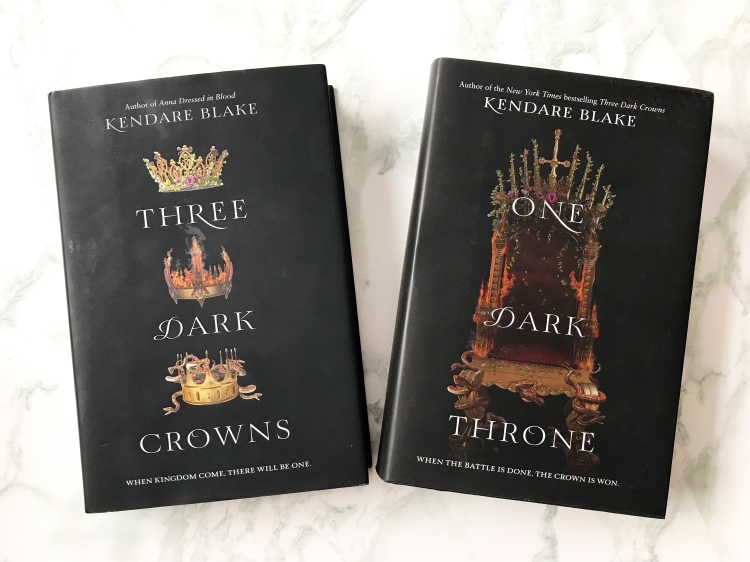 Three Dark Crown – In every generation on the island of Fennbirn, a set of triplets is born—three queens, all equal heirs to the crown and each possessor of a coveted magic. Mirabella is a fierce elemental, able to spark hungry flames or vicious storms at the snap of her fingers. Katharine is a poisoner, one who can ingest the deadliest poisons without so much as a stomachache. Arsinoe, a naturalist, is said to have the ability to bloom the reddest rose and control the fiercest of lions. But becoming the Queen Crowned isn’t solely a matter of royal birth. Each sister has to fight for it. And it’s not just a game of win or lose…it’s life or death. The night the sisters turn sixteen, the battle begins. The last queen standing gets the crown

One Dark Throne – The battle for the Crown has begun, but which of the three sisters will prevail? With the unforgettable events of the Quickening behind them and the Ascension Year underway, all bets are off. Katharine, once the weak and feeble sister, is stronger than ever before. Arsinoe, after discovering the truth about her powers, must figure out how to make her secret talent work in her favor without anyone finding out. And Mirabella, once thought to be the strongest sister of all and the certain Queen Crowned, faces attacks like never before—ones that put those around her in danger she can’t seem to prevent.

Throne of Glass – Celaena Sardothien, an 18-year-old assassin in the kingdom of Adarlan, as she frees herself from the shackles of slavery. Following her imprisonment in the Salt Mines of Endovier, she is offered the chance of freedom by Crown Prince Dorian Havilliard by competing in a dangerous competition to become the King’s personal assassin. Her stay at the glass castle in Rifthold leads her to develop unexpected friendships and draws her into a dark and menacing power struggle within the castles walls.

Crown of Midnight – From his glass throne rules a King with a fist of iron and a soul as black as pitch. Assassin Celaena Sardothien won a brutal contest to become his Champion. Yet Celaena is far from loyal to the crown. She hides her secret vigilantly; she knows that the man she serves is bent on evil. Relationships are tested, lives lost, battles fought and the life-altering secret Celaena has kept since her parents death is finally revealed.

Heir of Fire – Lost and broken, Celaena Sardothien’s only thought is to avenge the savage death of her dearest friend. Any hope Celaena has of destroying the King lies in answers to be found in Wendlyn. Sacrificing his future, Chaol, the Captain of the King’s Guard, has sent Celaena there to protect her, but her darkest demons lay in that same place. If she can overcome them, she will be Adarlan’s biggest threat – and his own toughest enemy.

Queen of Shadows – Aelin/Celaena Sardothien, returns to Erilea—for vengeance, to rescue her once-glorious kingdom, and to confront the shadows of her past… She will fight for her cousin, a warrior prepared to die just to see her again. She will fight for her friend, a young man trapped in an unspeakable prison. And she will fight for her people, enslaved to a brutal king and awaiting their lost queen’s triumphant return. Aelin’s epic journey has captured the hearts and imaginations of millions across the globe.

Empire of Storms – After freeing the Kingdom of Adarlan from the tyranny of its ruler and saving her friends, Aelin Galathynius travels northward to return to her forgotten home, only to find herself unwelcome. Rallying forgotten allies in foreign lands against the growing threat of darkness from Morath, she moves to stand against the greatest enemy that Erilea has seen in hundreds of years.

Tower of Dawn – Chaol Westfall only shot at recovery lies with the legendary healers of the Torre Cesme in Antica – the stronghold of the southern continent’s mighty empire. And with war looming over Dorian and Aelin back home, their survival might lie with Chaol and Nesryn convincing its rulers to ally with them. But what they discover in Antica will change them both -and be more vital to saving Erilea than they could have imagined.

A Court of Thorns and Roses series by Sarah J Maas 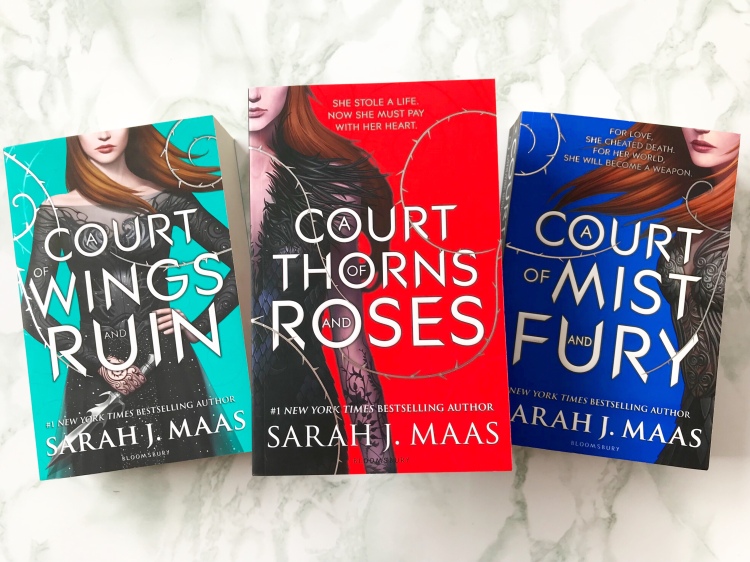 A Court of Thorns and Roses – When nineteen-year-old huntress Feyre kills a wolf in the woods, a beast-like creature arrives to demand retribution. Dragged to a treacherous magical land she only knows about from the legends of her ancestors, Feyre discovers that her captor is not an animal, but Tamlin— one of the lethal, immortal faeries who once ruled their world; not to mention one of the High Lords of Prythian. As she dwells on his estate, her feelings for Tamlin transform from icy hostility into a fiery passion that burns through every lie and warning she’s been told about the beautiful, dangerous world of the Fae. But an ancient, wicked shadow grows over the faerie lands, and Feyre must find a way to stop it . . . or doom Tamlin—and his world—forever.

A Court of Mist and Fury – Feyre survived Amarantha’s clutches to return to the Spring Court—but at a steep cost. Though she now has the powers of the High Fae, her heart remains human, and it can’t forget the terrible deeds she performed to save Tamlin’s people. Nor has Feyre forgotten her bargain with Rhysand, High Lord of the feared Night Court. As Feyre navigates its dark web of politics, passion, and dazzling power, a greater evil looms—and she might be key to stopping it. But only if she can harness her harrowing gifts, heal her fractured soul, and decide how she wishes to shape her future—and the future of a world cleaved in two.

A Court of Wings and Ruin – Feyre has returned to the Spring Court, determined to gather information on Tamlin’s maneuverings and the invading king threatening to bring Prythian to its knees. But to do so she must play a deadly game of deceit-and one slip may spell doom not only for Feyre, but for her world as well. As war bears down upon them all, Feyre must decide who to trust amongst the dazzling and lethal High Lords-and hunt for allies in unexpected places.

Novella’s– A Court of Frost and Starlight and Untitled

Angels and Demons – Robert Langdon is called to CERN headquarters in Switzerland to find about the religious symbological implications of the death of CERN’s finest and best-known physicist, Leonardo Vetra, a Catholic priest who has been branded with the Illuminati symbol.

The Da Vinci Code – Robert Langdon is in Paris to give a lecture on his work. Having made an appointment to meet with Jacques Saunière, the curator of the Louvre, he is startled to find the French police at his hotel room door. They inform him that Saunière has been murdered and they would like his immediate assistance at the Louvre to help them solve the crime

The Lost Symbol – Robert Langdon has an adventure with the concepts of Freemasonry in Washington D.C. Tricked into visiting the nation’s Capitol, Robert Langdon spends twelve hours racing through the monuments and buildings of the USA’s forefathers, searching for the truth about the secret society of the Masons.

Inferno – Robert Langdon wakes up in an Italian hospital with no memory of the events that led him to be in Italy. Soon he realizes that someone is trying to kill him. Langdon travels to Florence, Venice, and Istanbul with Doctor Sienna Brooks to prevent a biological attack by looking for a deadly virus that was planted by a client of a shadowy consulting group called The Consortium

Origin – Robert Langdon arrives at the ultramodern Guggenheim Museum Bilbao to attend a major announcement—the unveiling of a discovery that “will change the face of science forever.” The evening’s host is Edmond Kirsch, a forty-year-old billionaire and futurist whose dazzling high-tech inventions and audacious predictions have made him a renowned global figure. Kirsch, who was one of Langdon’s first students at Harvard two decades earlier, is about to reveal an astonishing breakthrough . . . one that will answer two of the fundamental questions of human existence.

Next Book/s in the series: Unknown

Red Queen – This is a world divided by blood – red or silver. The Reds are commoners, ruled by a Silver elite in possession of god-like superpowers. And to Mare Barrow, a seventeen-year-old Red girl from the poverty-stricken Stilts, it seems like nothing will ever change. That is, until she finds herself working in the Silver Palace. Here, surrounded by the people she hates the most, Mare discovers that, despite her red blood, she possesses a deadly power of her own. One that threatens to destroy the balance of power.Fearful of Mare’s potential, the Silvers hide her in plain view, declaring her a long-lost Silver princess, now engaged to a Silver prince. Despite knowing that one misstep would mean her death, Mare works silently to help the Red Guard, a militant resistance group, and bring down the Silver regime.But this is a world of betrayal and lies, and Mare has entered a dangerous dance – Reds against Silvers, prince against prince, and Mare against her own heart

Glass Sword – The crown calls her an impossibility, a fake, but as she makes her escape from Maven, the prince—the friend—who betrayed her, Mare uncovers something startling: she is not the only one of her kind. Pursued by Maven, now a vindictive king, Mare sets out to find and recruit other Red-and-Silver fighters to join in the struggle against her oppressors. But Mare finds herself on a deadly path, at risk of becoming exactly the kind of monster she is trying to defeat. Will she shatter under the weight of the lives that are the cost of rebellion? Or have treachery and betrayal hardened her forever?

King’s Cage – Mare Barrow is a prisoner, powerless without her lightning, tormented by her lethal mistakes. She lives at the mercy of a boy she once loved, a boy made of lies and betrayal. Now a king, Maven Calore continues weaving his dead mother’s web in an attempt to maintain control over his country—and his prisoner. As Mare bears the weight of Silent Stone in the palace, her once-ragtag band of newbloods and Reds continue organizing, training, and expanding. They prepare for war, no longer able to linger in the shadows. And Cal, the exiled prince with his own claim on Mare’s heart, will stop at nothing to bring her back. When blood turns on blood, and ability on ability, there may be no one left to put out the fire—leaving Norta as Mare knows it to burn all the way down